Daily Kos wrote an Open Letter to the 53% Guy.  It is a fairly interesting piece – well thought out and fair.  That’s what we need fairness. 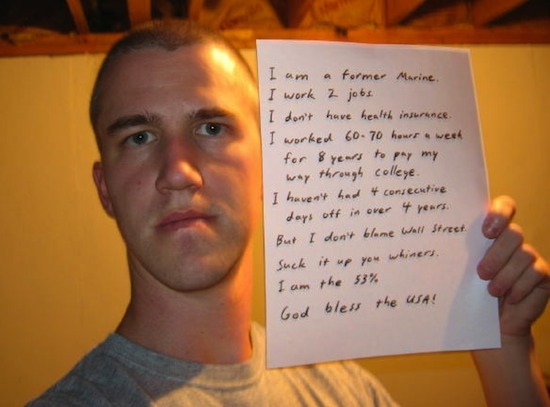 While appreciate the dedication and message this guy is putting forth, here is my list of things I know/believe:

Here is something I wanted to share from the Kos article:

Why wouldn’t we want this?   Why wouldn’t we want a system that balanced the contribution from the citizens and the corporations?  I mean the corporations in the US have  nearly $2 Trillion on their balance sheets.  Now that’s a lot of cash which isn’t being put to work to drive the economy.  I know all the economic uncertainty is why they are spending, but if they spent 20% of it a bunch of the uncertainty would disappear.

There needs to be social reform AND economic reform.  We need to respect individual rights, provide an environment where everyone contributes and provide services for people in need.

Quick numbers say we can quickly get out of this social inequity and financial injustice – we just have to do it.  While my math is rough –  here is one approach which might work.  We just need action and commitment to serving our citizens, which is something which I think has been lost along the way.